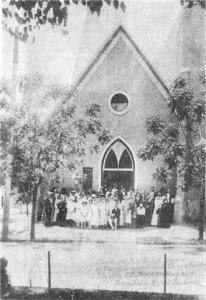 When Tucson was still a rugged frontier town subject to Apache raids and gunfights in the street, the Rev. Sheldon Jackson, Superintendent of Mission in the Arizona Territory, stood on the steps of the courthouse and invited people to worship. It was April of 1876, and the first Protestant church in Tucson was born. Three years later, on a site now occupied by City Hall, First Presbyterian Church in the Courthouse Plaza was dedicated.

Maintaining a frontier church was not easy, and in 1881 that building was sold to the Congregationalists. The two congregations worshipped jointly for many years, but in 1902, seventeen people signed a petition to establish once again a Presbyterian church in the city. On May 25, 1902, the first service of Trinity Church was held in the old Odd Fellows Hall. Five years later, with no called minister, the members of Trinity voted to erect a building at the corner of Scott Avenue and Ochoa Street. Intended as a temporary home, it served the congregation for 23 years. Dedicated to worship and ministry in the heart of the city, Trinity in this location served the spiritual needs of the vocational Indian School as well the larger community.

In 1925, a new building was constructed on Fourth Avenue, a Spanish-colonial edifice designed by noted architect

Henry O. Jaastad. In addition to an elegant sanctuary, there were rooms for classes, meetings, and a base of operations for the many activities Trinity offered the community, as well as its members. Thousands were flocking to Tucson for respiratory relief, and with no social service programs in place, Trinity stepped up to provide assistance and support for these many newcomers, work that continued through the Great Depression of the 1930’s.

As the population of Tucson swelled after World War II, so did Trinity’s membership. A new sanctuary, offices, and an education wing were added to accommodate its burgeoning ministry, which included an outreach to University students and a pre-school that served low-income families. During the social turmoil of the 1960s and 70s, Trinity was known for its pro-integration, and for grappling with many other social issues.

As outlying areas of Tucson grew, Trinity “seeded” many new Presbyterian churches, and its own membership dropped. Like a mother hen with an empty nest, Trinity faced a decision about its future: stay in its Downtown location or move to the suburbs? 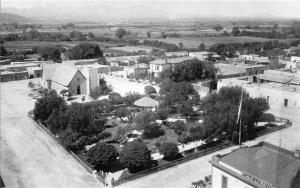 Trinity has elected to stay in the heart of the city where our ministry began. From the Cup of Water offering at each Fourth Avenue Street Fair to our Food Pantry and Resource Center, we continue to reach out into the neighborhood and beyond, serving as the hands and feet of Christ in our community. We have consolidated our ministry in a smaller, refurbished footprint and are seeking new and exciting ways to use the remainder of our space.